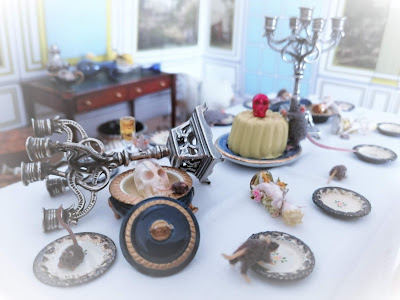 There was a strange sound that woke up Belle Zonneschut. It was the middle of the night. She peeked though the curtains of her four poster bed but could see nothing. Not the painted ceiling, not the marbled wallpanels, nor the furniture in it. She was only married for two months to Carel Polyander and this was the first night she spend alone at Huis ter Swinnendael. He had to leave this evening on an errand for the Prince of Orange. He would be back soon. Wouldn't he? Silence...

But wait. This was not her family house in The Hague. With the century old chestnut tree caressing the windows on the left of the second floor. This was a moated country house. The nearest trees stood at least 30 meters away, and those were clipped boxhedges. No not a tree...

Oh why was Carel not here? He would know what it was. Surely it could not be a ghost, could it?

Silly me, she thought, I must have drunk a glass of wine too many. Or was the pheasant undercooked? It was probably the blancmange with those poached pears. They easily give you gas and bad dreams. Although... Could one really trust those newfangled potatoes?

Belle's ponderings about her lonely diner that evening was rudely disturbed by more scratching and a loud BANG. She sat upright in her bed. With eyes wide open she peered into the darkness around her. Whatever that was, was not done by an undercooked pheasant. She stepped out of her warm bed into the chilly room.

She found the bellpull and rang for the servants. Normally she would hear a distant bell ringing. And servants feet running towards her room to do her bidding. But now she heard nothing. She pulled again and again. More furious with every pull. But not a sound. With one last pull the rope in the ceiling snapped and the embroidered bell pull fell down on the floor. No bell had rung.
Now Belle really started to get scared. She found the door handle. the metal was so cold. She turned it and opened the door. Expecting to see light in the art gallery. But it was pitch black. Only the faintest moonlight fell through the lantern on top of the roof. But that, together with the candle she found and lit, was not enough to dispell the dark shadows in the corners. Belle walked up to the balustrade and looked down. She could hear the sounds coming from behind the diningroom door.

"Who is there?" she asked sharply. Surprised at the fear that was audible in her voice.
"Don't go there. You are not invited..."  a sombre voice whispered in her ear. Belle turned around but there was nobody there. The only eyes she could see in the shadows were those behind the varnish of the old painted portraits on the wall. Cold but watchful eyes. Belle decided that she had to know to what exactly she was not invited. It must be the servants. Making good use of their masters absense. How dared they! she was the mistress of this house. And she was going to get to the bottom of this. The fear that had gripped her moments ago had dissipated and turned into anger.

Belle walked towards the staircase. When she stepped on the top step she heard another bodyless voice behind her.
"The yearly banquet of the Zonneschuts of old. Those poor sods who lost their souls and died without the mercy of redemption. Don't go there..." Belle looked back but there was again nobody in sight. Belle hesitated. Lost souls? The servants are having a laugh at my expense!

Belle rushed down the stairs and felt the cold marble tiles of the hall under her bare feet. The candle snuffed out when she ran down the stairs. Now only the pale moonlight that shone through the windows remained. In front of the diningroom door she clearly heard the scratching and squeaking. She looked around her in the empty room. The portraits seemed to be watching her every move. Holding their breath. A loud bang from behind the door brought her back to the here and now.

"Well, I am warned... But why stop now?" she whispered. She put her hands on the door and wanted to push them open when she heard what seamed like a dozen voices whisper in alarm, "Go back, go back!" She shook her head in an attempt to shrug of her fear.  She pushed and the doors swung open. But nothing could have prepared her for what was in that diningroom. 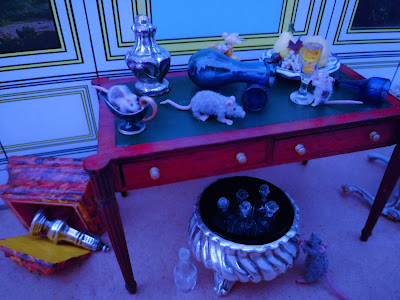 The room was a mess with red eyed rats large and small crawling over the tables and into dishes. Eating the rotten foods and drinking the putrid wines that stood everywhere. The scratching and squeaking stopped immediately as the door opened. A chill made Belle shiver... 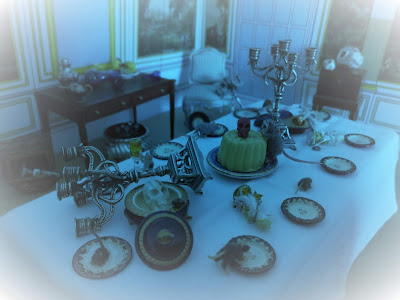 "She is not one of us..." the rats said as one. "She is alive. She still has her soul... Give us your soul! REDEEM US!" The rats, ghosts of Zonneschuts of passed ages turned to her. Adament to eat her soul out of her. Desperate to stop wandering this earth in perpetuety after death. Belle screamed her longs out. Turned and ran as quick as her feet could carry her. But he rats were faster and gained in on her. She could hear their voices rasping 'Your soul. Give us a bite of it!" She could feel their claws sink in her skin as they ran up here nightgown to reach her neck. She missed a step and fell....

She kept falling and falling and never hit the ground. Instead she woke up screaming. Cold sweat all over her body. It must have been a bad dream. But wait... There was a sound.... Some kind of scratching.