The famous porcelain with decorations in blue an red, somtimes highlighted with gold. We all know it or at least have seen it. Imari. 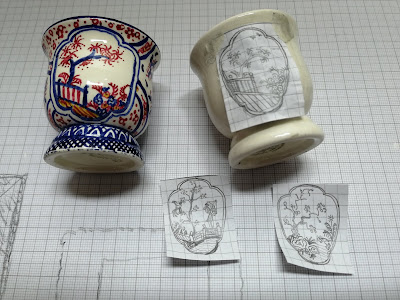 Originaly, as the name suggests a Japanese type of porcelain. It was soon copied in China for the European market and eventually also copied by European porcelain manufacturers for the European market. But today, centuries later, all these types of imari ware are highly prized all over the word.
I have two miniature gourd type vases from the late 19th or early 20th century. Not the best quality made at that time but I like them. 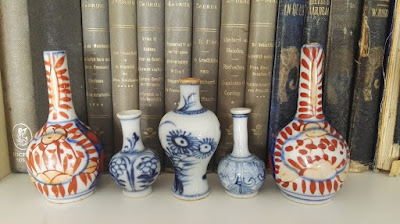 You may have read my first and second post (back in 2018) about the old eggcups I painted in Delft blue. They were inspired by the tiny garden urns in the babyhouse of Sarah Rothe van Amstel which can be seen in het Haags Gemeentemuseum in the Hague. 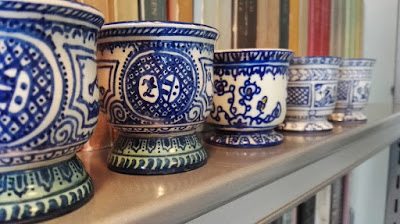 I used special felt tip pens for ceramic in these first attempts. But although I tried my best the lines were much to thick for miniature. And besides that the paint spread evenly, without room for adding colourvariance though thickness or multiple layers. I did my best at the time. But now that I have painted ceramic with paint and brushes, I feel that I now can do better. So it was time to paint another eggcup. 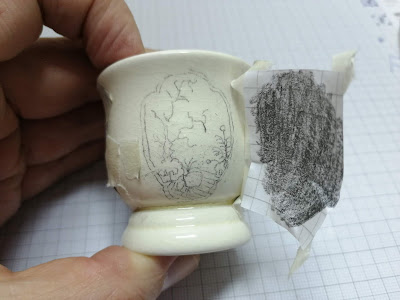 One eggcup/garden urn that I did not show you in the earlier posts is the one where I used Imari porcelain as an inspiration. Here you can see (right) it compared to the second one I made using porcelain paint (left). You can see the difference between the two. I have made the second one for a friend. So it will not get a place in Huis ter Swinnendael. 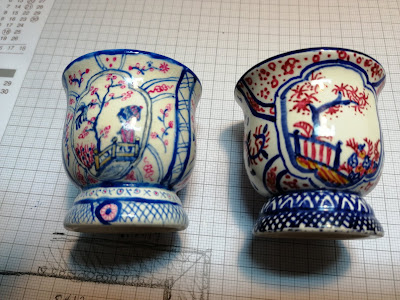 I preferr the second one over the first. With the confidence for using paint and brushes instead of marker pens I look at the old Delft vases again and think, this I can do better. So just as with the Imari one the Delft blue gardan vases will be redone. But that is for a next post my friends.