My self decorated miniature porcelain. (No workshop due to Covid-19) :-(

Hello my friends, As you all may know I love porcelain. As well as 1:1 as in miniature. Today I would have attended my fifth workshop given by Cocky Wildschut. I have learned so much from her, but there is a lot more to learn yet.
However, todays workshop was cancelled (well in advance) due to the Covid-19 pandemic. Having lost a good friend to Covid-19 I take this disease very seriously. I totally agree with the cancelation of the workshop, but when my calender told me  that today would have been the day, that made me a little sad.
So what to do? Without anything new to show you, I decided to make a little overview of the items that I have decorated in the last 4 workshops I did attend. Memories of four happy days! 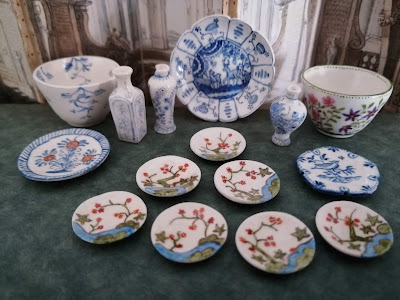 In the first two workshops I decorated the items in the picture below. They are partly chosen by Cocky in order to teacht certain techniques. The plate with the bird and the blue bowl were pieces I decorated myself using those techniques. 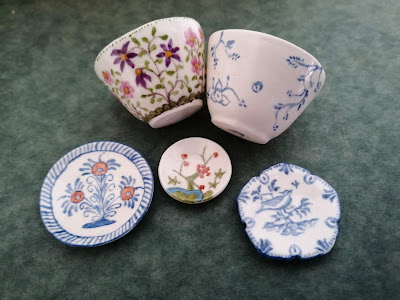 The bowl and two plates on the left were assignments to learn the basics of  porcelain painting. The bowl and the plate on the right were my own choices. The small polychrome plate was the first miniature plate that I decorated and in the back of my head I had that nagging feeling that I had seen the plate before. I could just have asked about it? Cocky would have told me. But when I was rummaging through my books on miniatures I came across this familiar photo! 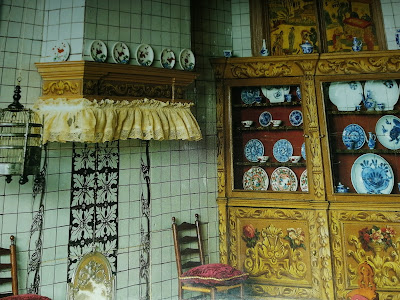 The little plate with the red flowering tree and the little blue stream is a design based on one of the plates that stand on the mantle shelf in the large kitchen of Petronella Oortmans babycabinet in the rijksmuseum. Petronella has 9 of these plates on that shelf. They are called Arita ware or Kakiemon ware which is a type of Japanese porcelain. And then I knew that I wanted a series of those little Kakiemon plates for Huis ter Swinnendael! 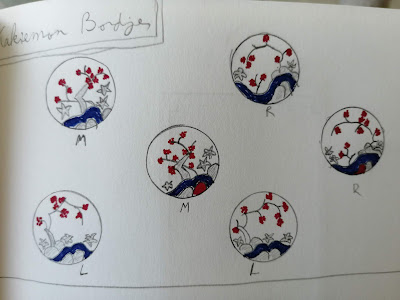 The blue and white decorated porcelain is very classic and desirable, but it is not the only porcelain that was collected.  I wanted to make a small collection of these Arita plates. In the third workshop I asked Cocky if I could make more of this type of plate. But I did not want to make six more plates that look the same as the first one. So I took the Original design where the tree stands in the middle, (named M.) And drew two alternative designs in the same style. With the tree on the left (named L.) and with the tree standing on the right (named R.)Than I drew a few more of these basic designs to get it in my fingers. 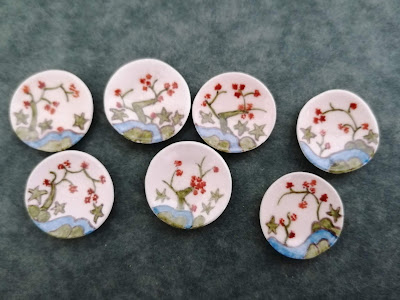 And here is the result. Seven plates with three basic designs. The biggest difference between them is the placement of the red blossoms on the branches. They differentiate the look of the plate and on the first glance they all look different although they have three basic designs. This is also the case on the 17th century ones. I am happy with the result. I plan on placing them on the mantle shelf of the fireplace in the stewards office. 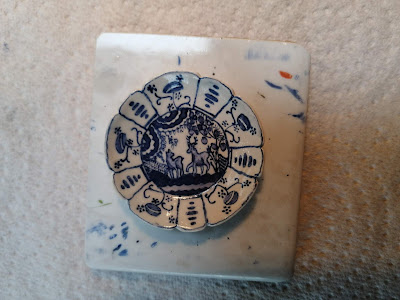 The next item is this large plate. The photo was taken just before it went into the pottery kiln. It has a decoration of a deer and a stag and is heavily decorated. In the left pic I put on the decorations with pen. In the second I filled certain surfaces with the brush or used the brush to add shades.  The shading was done in the fourth workshop after the penned design had already been fired in the kiln. 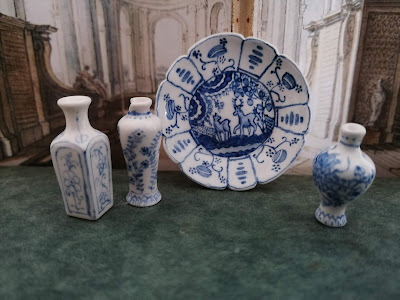 The remainder of the workshop I used on decorating a few vases. They are not ready yet, I have to finish them in a next workshop but you can see where I am going with these. I had a lot of fun following the workshop . Cocky, her husband Rien and the other participants are all so very nice. It was another well spent afternoon.
I hope that a vaccin is found soon so that the world can become normal again. And when the workshops are resumed, I will have a lot of ideas for new items. :-)

Well that's it for now. I hope you have enjoyed this little post. Till next time!