A great occasion for a miniature occasional table 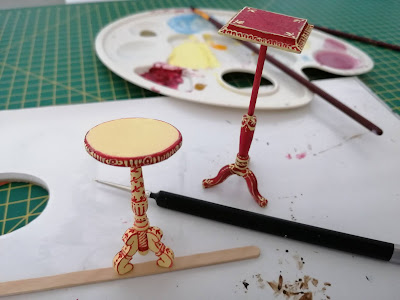 Way back in 2018, I tried my hand at wood turning. I did not have a lathe back then but used an old machine drill to work on some beech roundwood we had lying around in our shed. One piece came out like this. A balustre shaped table leg meant for an occasional table. 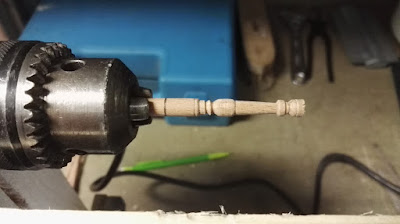 But before I could make the rest of the table I moved on to another mini project and a lot of other things followed in suit. In short I forgot all about this table leg. Not every line on it is straight and I can probably do better (and I will, there is a lot more that I want to make on that lathe.) but I simply can't discard it. So a table it will become. 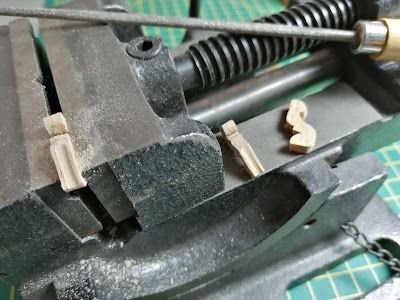 I drew a little scroll shaped leg on a pièce of beechwood. Then glued two more pieces onto it and cut out three legs with my fretsaw.Since glueing a straight surface on a round one will not be very succesful, I put each of the scroll feet in my vice and with a round needlefile I rounded the surface in order for them to fit the turned leg better when glued onto each other. 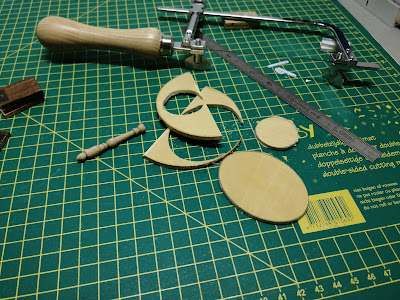 I also drew two different shapes of table tops on a piece of softwood and cut that out. I decided on using the round top. Then I used a file to smoothe the top edges of the table top and the scroll legs.  Now the 3 scroll legs, the balustre leg and the table top are all glued together and we have a table! 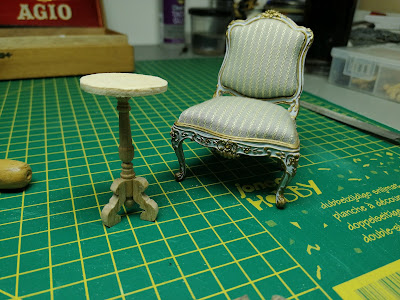 It is a small table which is used as a candle stand or something like that. In auction catalogue this size of occasional table is also called a wine table. Probably because it is large enough for a glass of wine (or port) and a good, albeit medium sized book. :-)

After aplying two coats of gesso and sanding it, it was time for some decoration. After the Brown wooden pieces it is time for a splash of colour. The basecoat is a mixture of cadmium yellow which is mixed with titanium white into a soft, creamy yellow. When it had dried I used alizarine crimson for adding details. 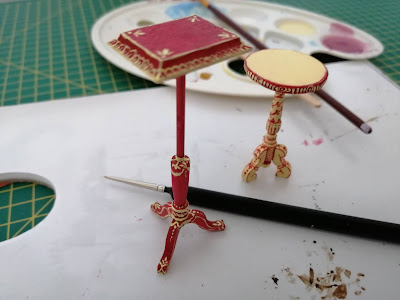 After painting the table I still had a lot of paint on my palet. A shame to let it go to waste, now would it not? Next I took the candlestand I had put together earlier. It is a 'The House of Miniatures' kit that Mrs. M. had kindly given me. I turned the colours around and added pale yellow decorations on a crimson base.

I am not sure yet if the occasional table and the candle stand  will end up downstairs or upstairs . For now the Steward may have them. speaking of the steward, his office is progressing but very slowly. Making around 800 tiles for the 2 floors is taking a lot more time than I thought. Here is a little 'sneak peek' though. The arches will be filled in with raised windowseats and behind that wil come the outer wall with the windows inserted into it. 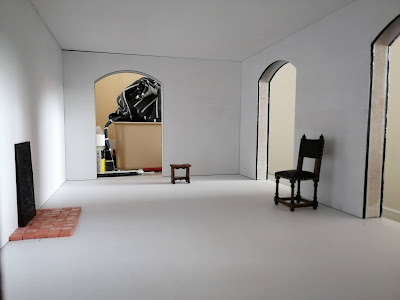 Well thats it for now. I hope that you have enjoyed this little post and till next time!