Hello my friends,
September has arrived but unfortunately we have had to postpone the move into our new house to mid oktober! Which means that all the miniatures and miniature related stuff that are packed stay packed for another six weeks! So sad, but we'll get there eventually. No need to despair. In the meantime there is something I can share with you guys.
In 1806 it was not yet fashionable to put up ancestral harnesses in the hall of you country house. But displaying weapons themselves was not uncommon. So why not place a mortar or cannon in the hall of Huis ter Swinnendael? 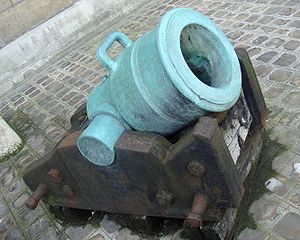 Although I am a peaceful person myself, I have already collected a few weapons for Huis ter Swinnendael. The silver and steel sword made by Jens Torp and the mahogany, steel and silver hunting rifle and a set of dueling pistols. Those are made by the late Tony Watt. 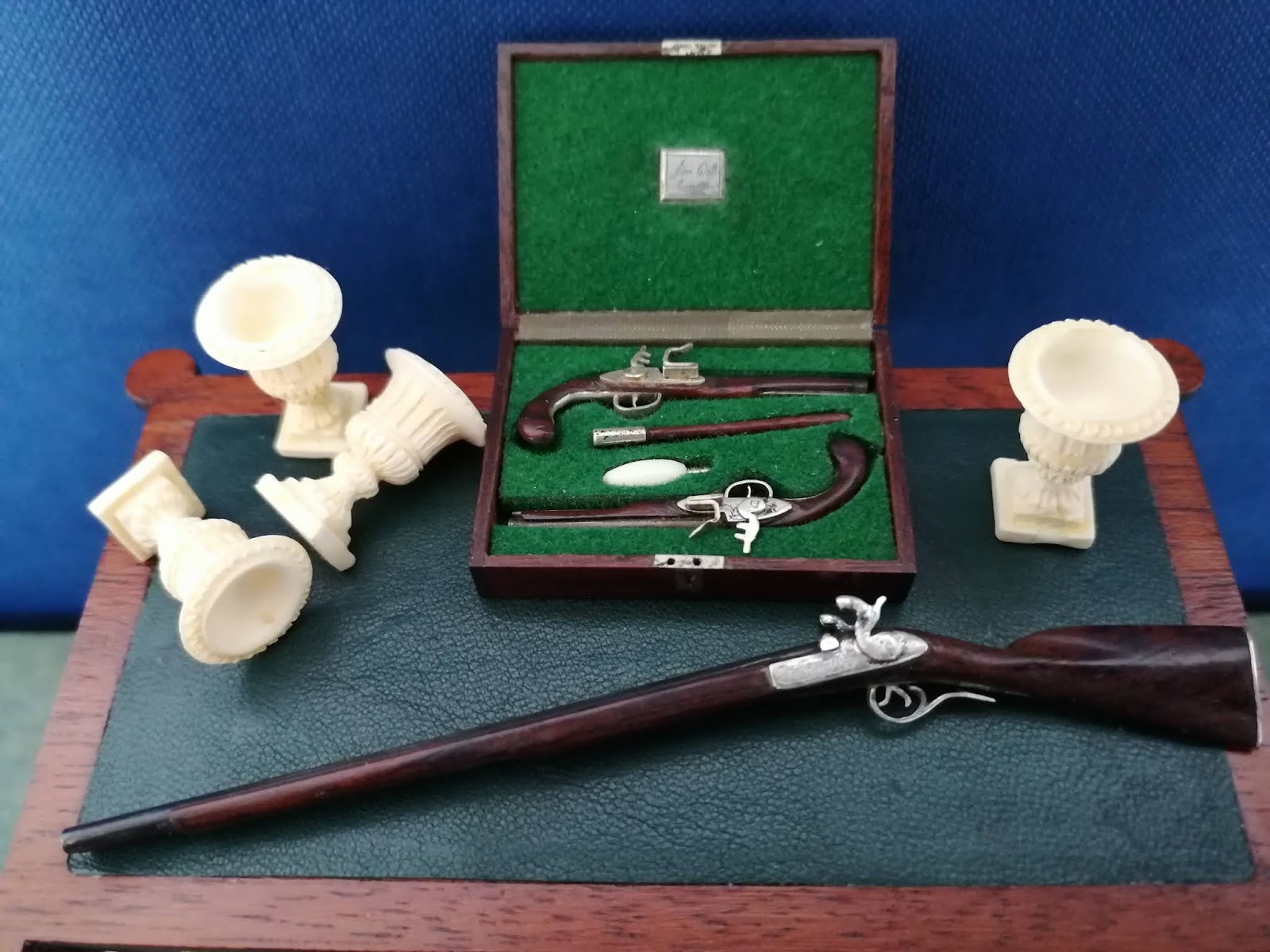 I also have another huntingrifle which looks like an american colonial rifle and presumably is made by an american miniaturist. But the seller was not sure of its provenance. 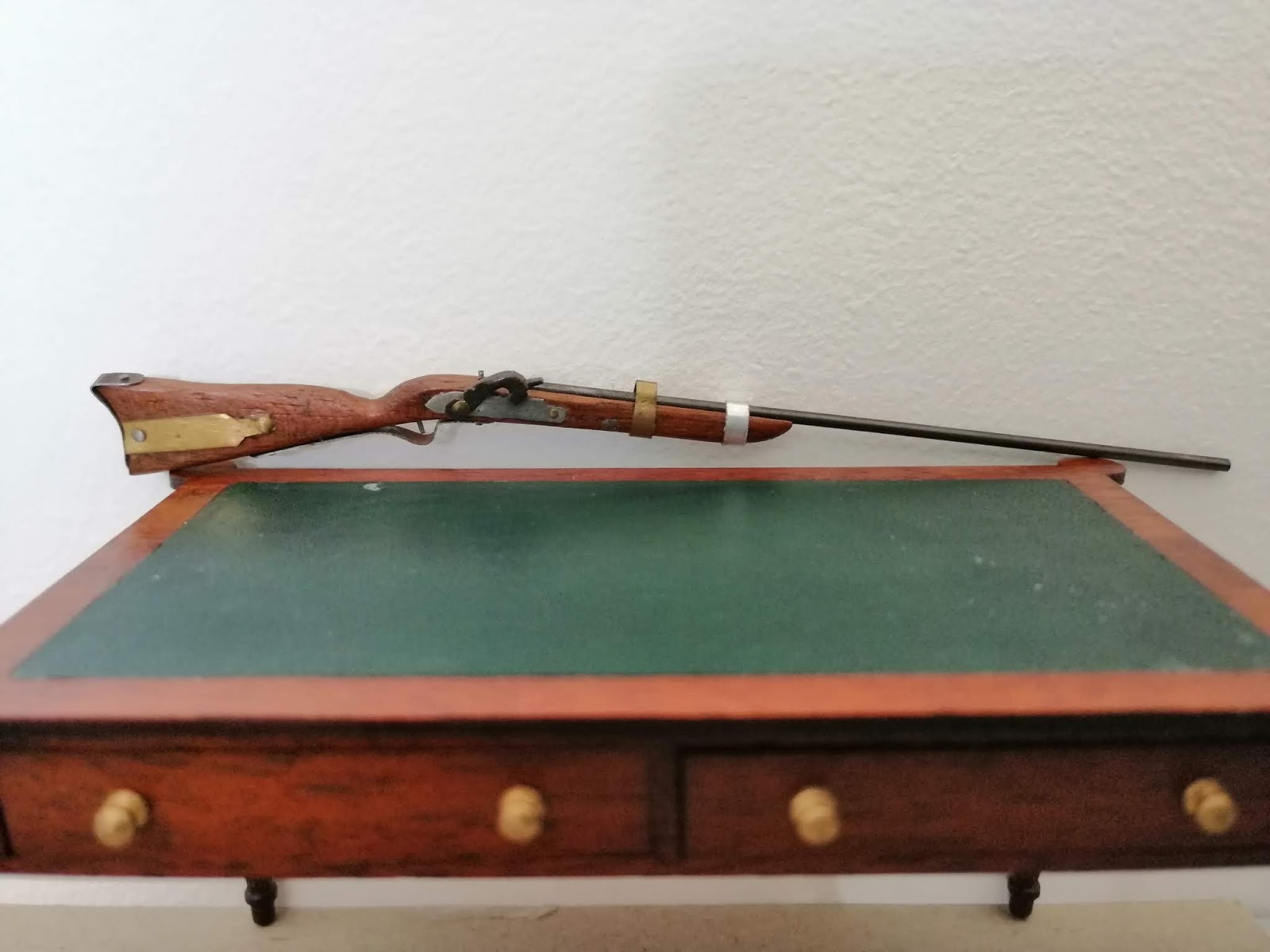 So why not stop there? It would be indeed a good point to stop, but there is one more ornamental piece of firearm that I want in miniature. And although I did not realise that I wanted to have it, until I got this miniature clock... I do want it now! 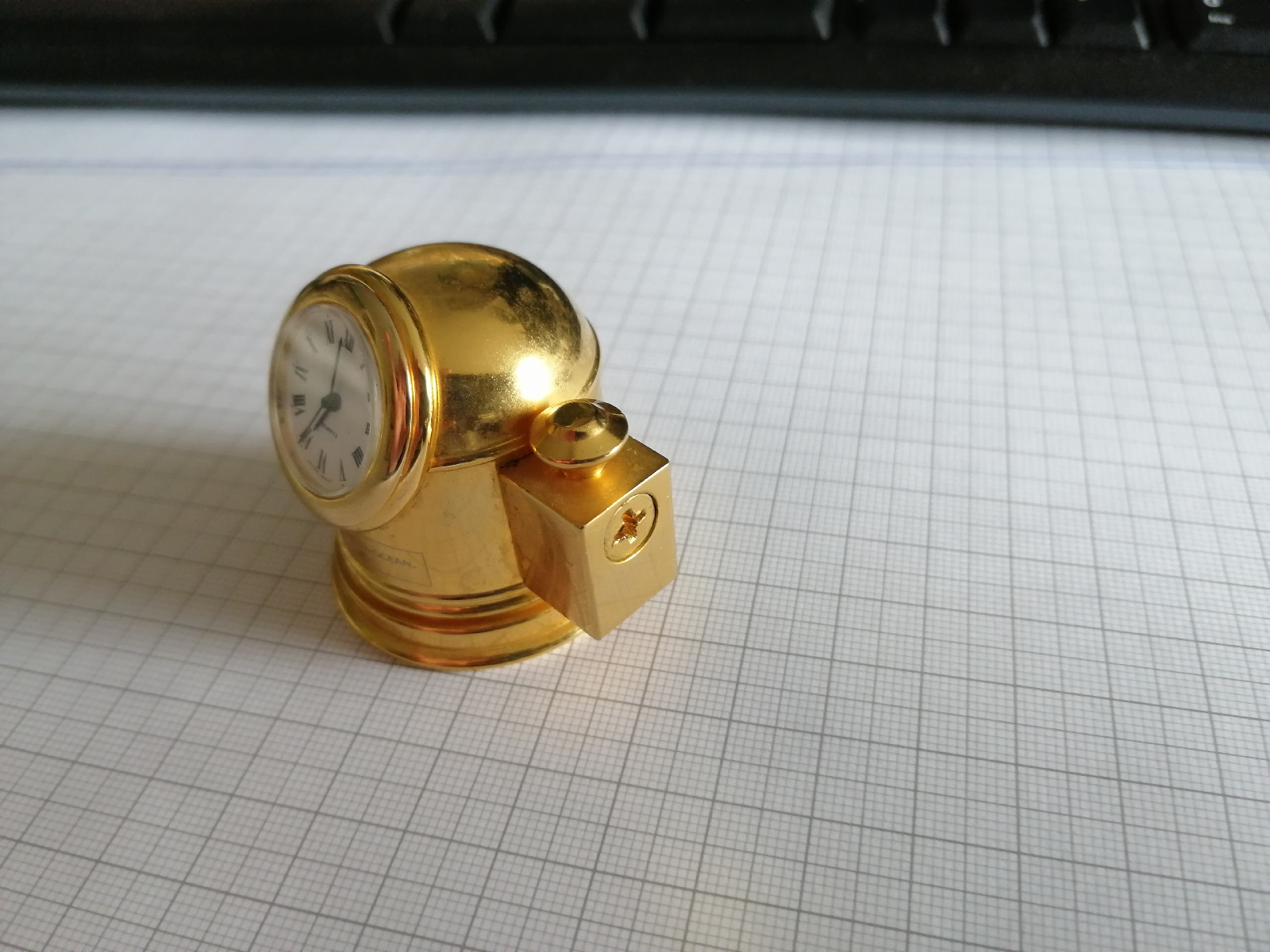 This little brass clock is shaped like a ships compass. The compass would be hung inside it so it would remain level at all times The blocklike attachment to the side should resemble a lantern for a little oillamp so the compass can even be read during dark nights and stormy weather. 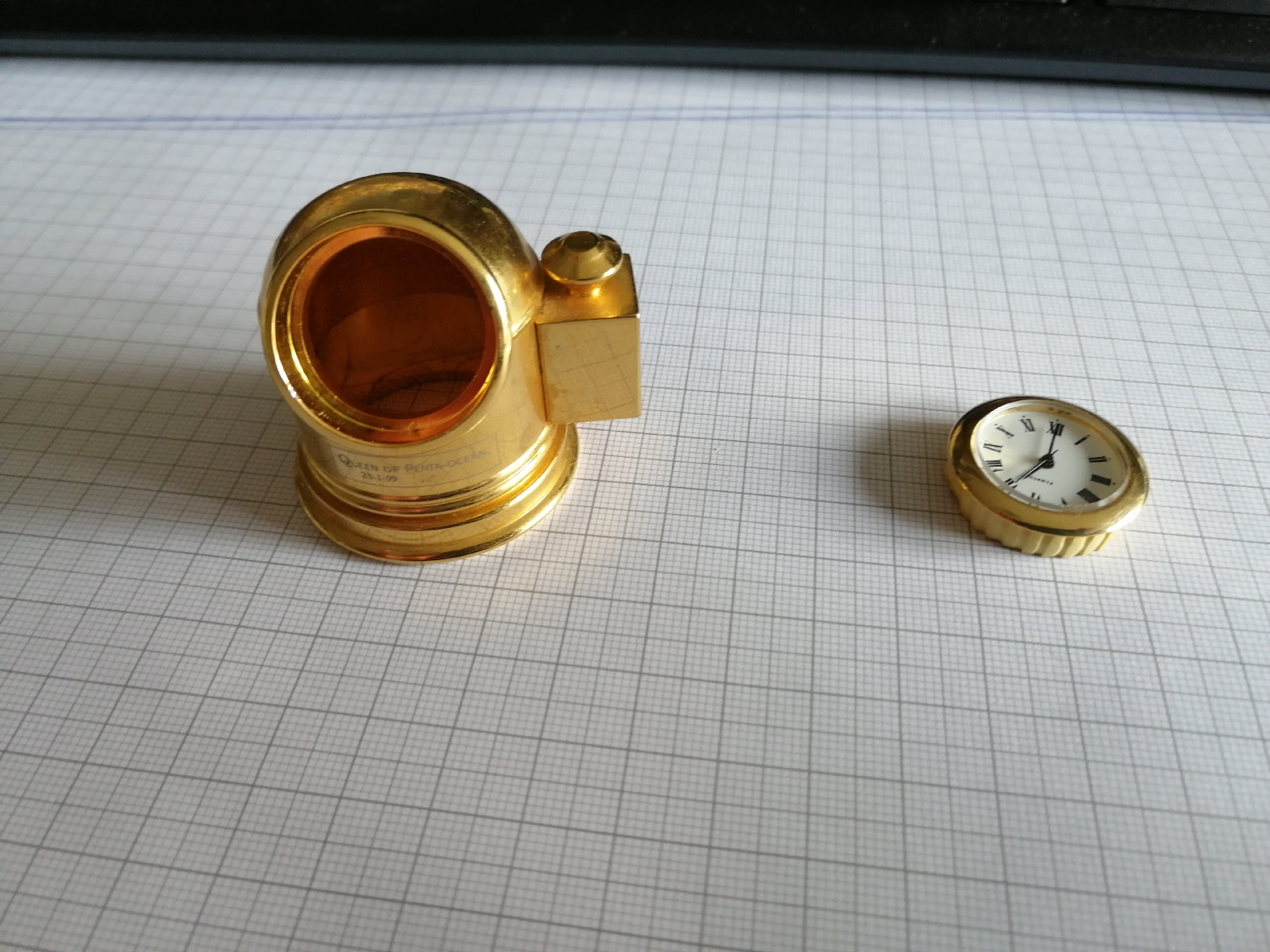 A small sticker reads the company's name and the year 1999. It was a gift for employee's or relations of a maritime company. This is a late Victorian model and not very intricate. So useless for Huis ter Swinnendael. Or not? 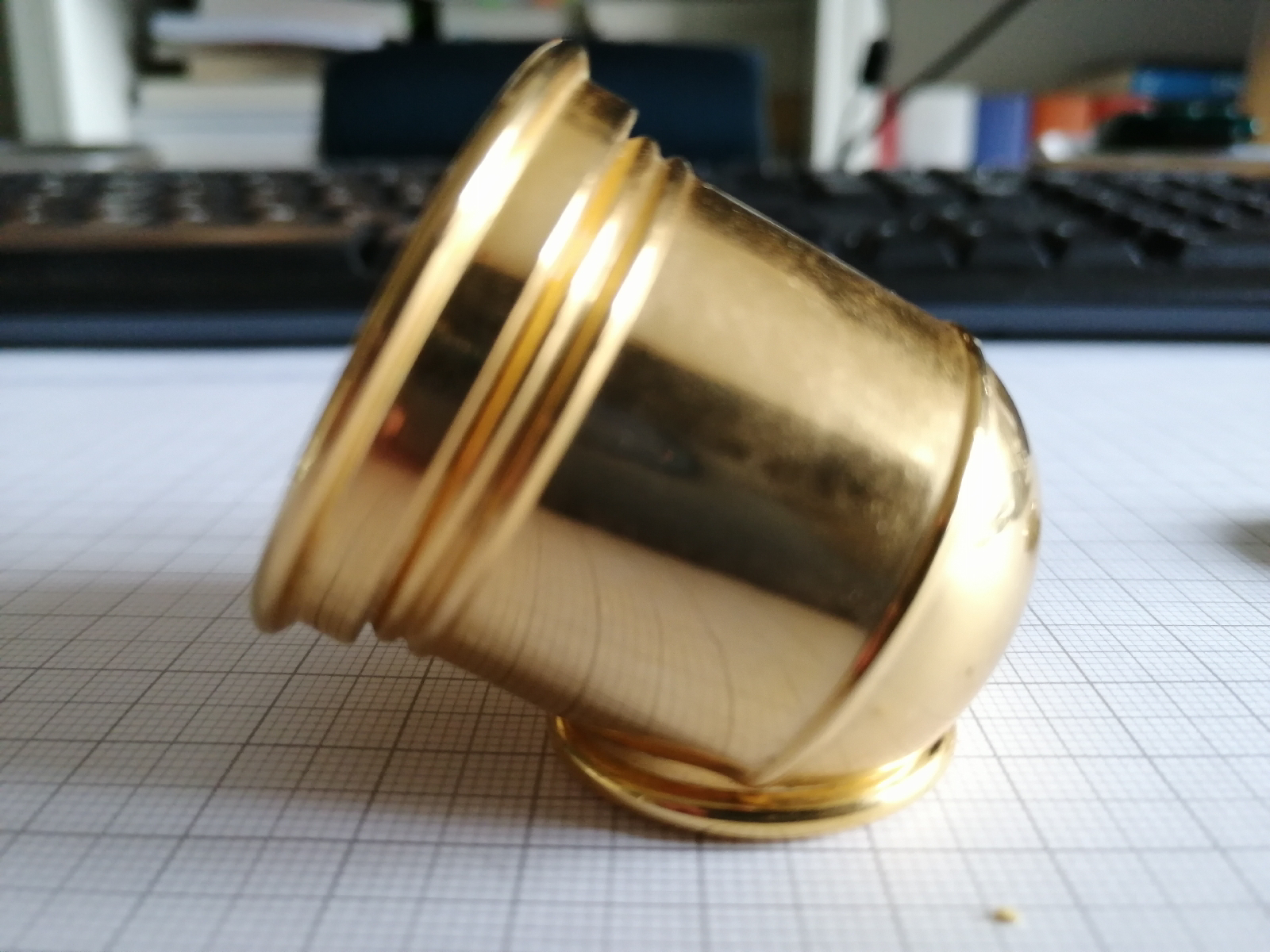 Since in 1806 it is not yet 'en vogue' to put up ancestral harnesses in grand houses, ceremonial or ornamental cannons were sometimes displayed in halls and gallery's. And since the great grandfather of sir Carel Polyander was at the battle of Terheijde. Where the Dutch "vanquished" the British (technicaly it was just a stalemate so victory could have easily gone to the British, but they retreated first) during the second anglo/dutch sea war in 1653. Having a mortar from his ship as a  reminder of this "heroic" feat would be a great and unusual miniature.
Now there are miniature mortar cannons out there, so why take the trouble to make one out of this brass trinket? Short answer is that those are often too small or too big, or too modern. And this way it will be a unique miniature. I asked Marie-Louise of Smallscale to help me with the metal part of the mortar. And I would make the wooden sled it rests on. 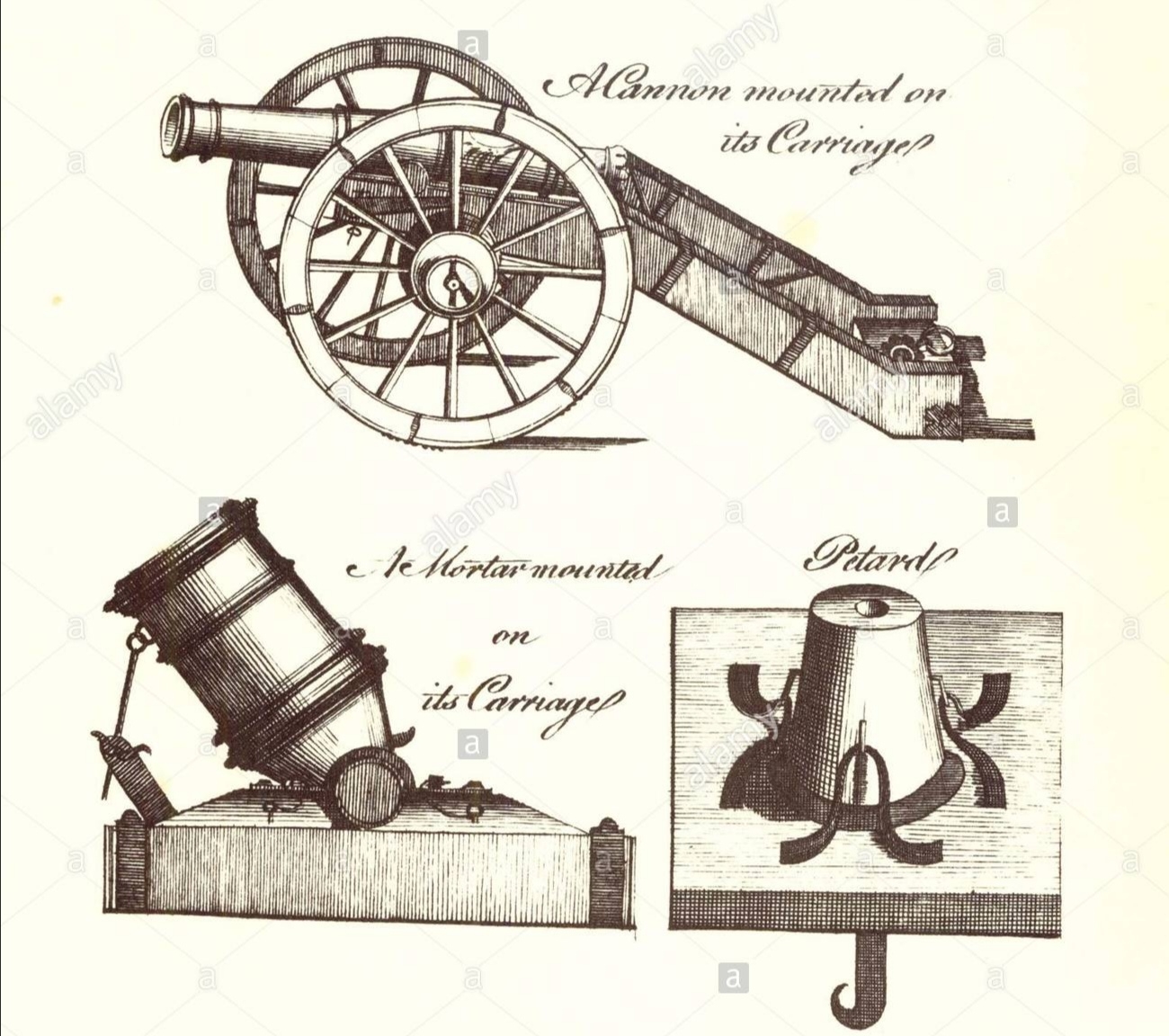 But what is a mortar anyway? Up until the 1800's the weapon was often made of bronze, and many mortars had a fixed elevation of 45°. The mortar was mounted on a "bed" so without wheels (unlike a canon). In the battery, the mortar was generally bedded upon a level wooden platform; aboard ship, it was a revolving platform, so that the piece could be quickly aimed right or left. The mortar's weight, plus the high angle of elevation, kept it pretty well in place when it was fired. And that high angle was its worth to the artillery. Walled defences were great at stopping horizontal gun and cannon fire, but were quite defenseless for projectiles falling from the sky. 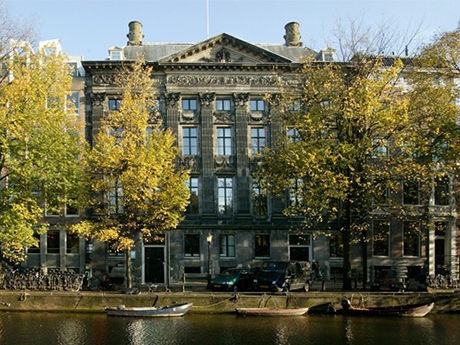 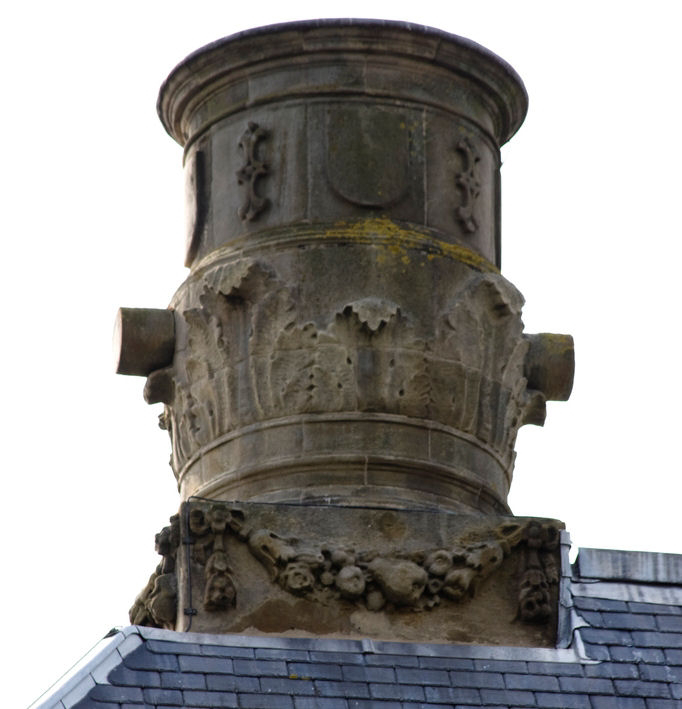 In Amsterdam the famous Trippenhuis has mortar shaped chimneys carved out of sandstone. Queer subject for a chimney, no? Although smoke coming out of the mouth of these "mortars" would add an eerie realistic touch.
But that is not all. One of the painted ceilings inside show little cherubs flying around while carrying canonballs, a mortar cannon, and rifles. The reason for this unusual subject for expensive embellishments is simple. Part of the huge wealth of the Tripp family came from making and selling armaments on a grand scale. 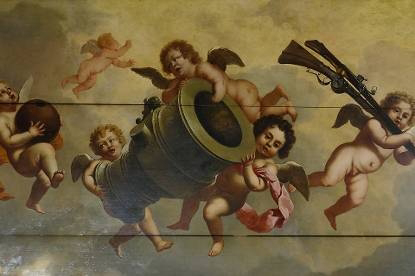 But back to 'my' mortar cannon. I have given the little object to Marie-Louise. She has given me permission to post this picture of the first alterations that she is making to transform the shipscompass into a mortar cannon. It seems however that this item is not made of brass after all, but some cheap alloy with a thin brass coating. So perhaps soldering may not work on it. If not there will be other options. We'll keep you posted on the progress! 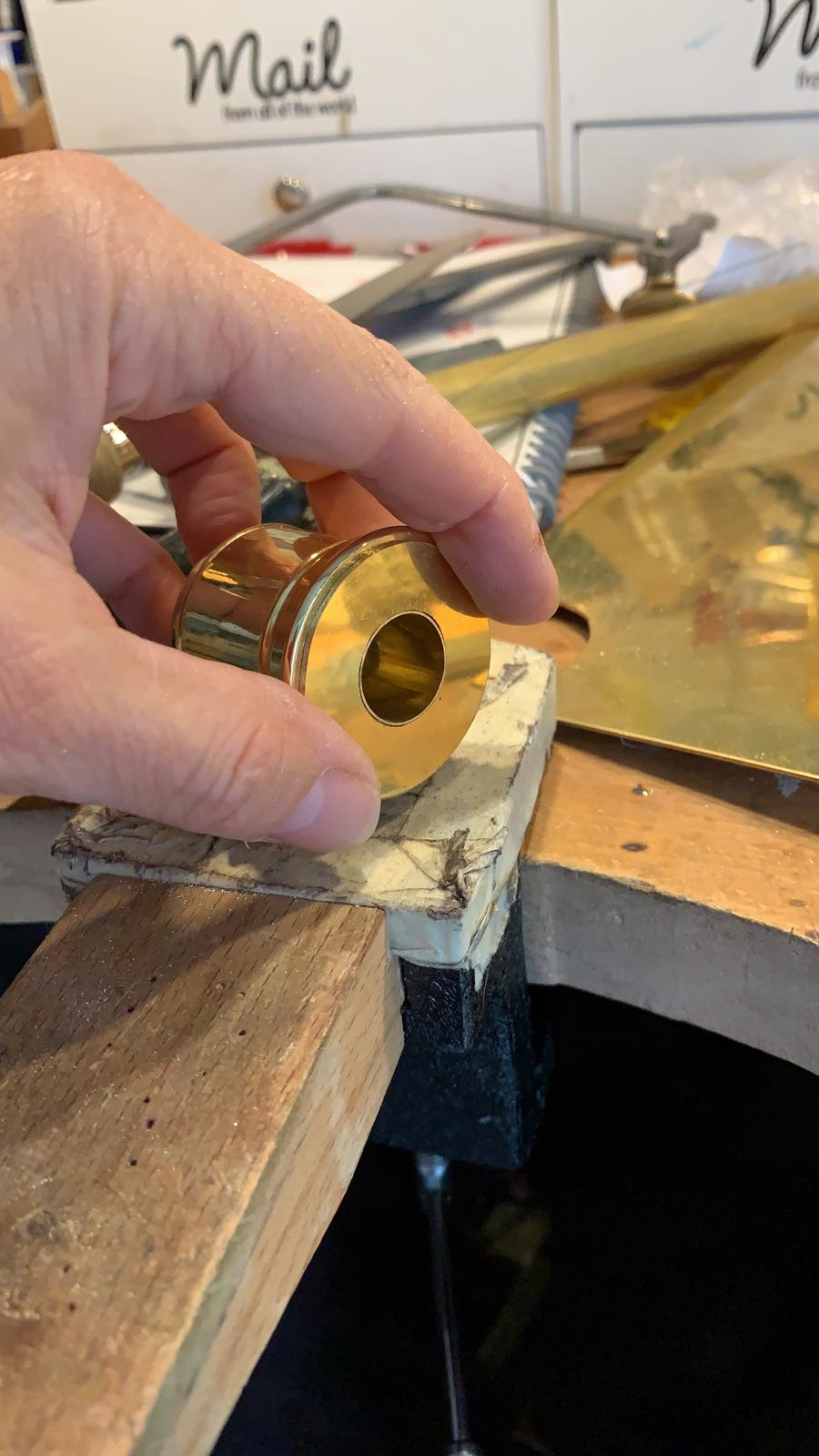 Well that is all for now. As soon as she has finished the transformation I will make the wooden sled to carry the mortar and try to  find some 'canonballs' of the right size.
And when all that is done I will show you the end result. Lets hope it will work out as planned. Fingers crossed!
Huibrecht
op September 03, 2021