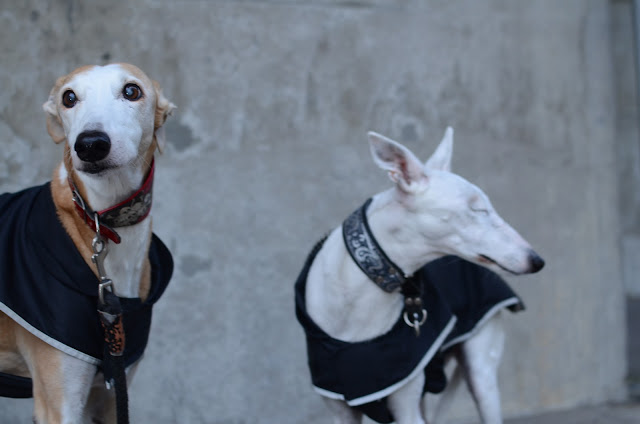 Pita & Lorca
Hello my friends,
You may remember that I added a little plastic pooch to some photos a few years ago. The dog came with a job lot, and I decided that he was too cute to throw away. He's a mini terriër I named Quintus. He looks perfect for the part of a lapdog for Belle Zonneschut to indulge and spoil with cake and other treats. I imagine Huis ter Swinnendael will house several animals. For example rats and cats downstairs. Parrots and dogs upstairs and mice in the attic. And perhaps a nest or two around the house? 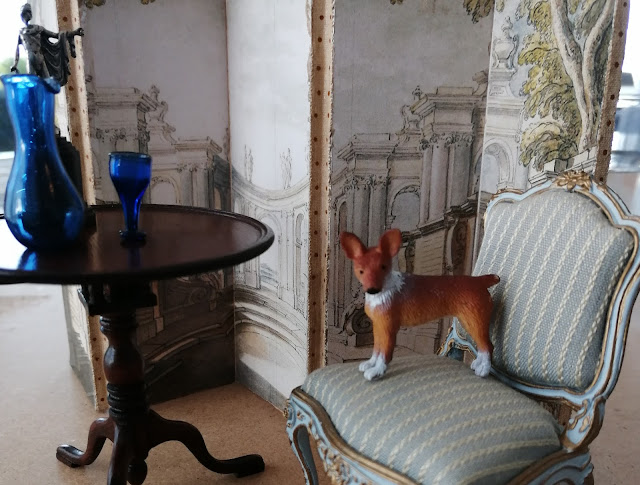 I am a dog lover myself and we have had a few dogs over the years. I love and have loved  all of them. One that stole my heart in particular was Lorca. A Portugese Podenco. We inherited her together with Pita when her previous owner, a very dear friend, died unexpectedly.  Here you can see Lorca with her 'sister' Pita, a Spanish Galgo.
Lorca had turned blind in that same year. And to save her from the pain this infliction caused by her ailment, her eyes had to be surgically removed. It made no difference for her eyesight, she had already turned blind. She was almost twelve years old when this happened. We adopted her to let her spend her remaining days with us. Lorca had always been very playful. If you gave her a ball she could play with it for an hour. She would kick it between her hind legs and then turn around and catch it while still rolling. And kick it away again, and again. She was a cunning little huntress. 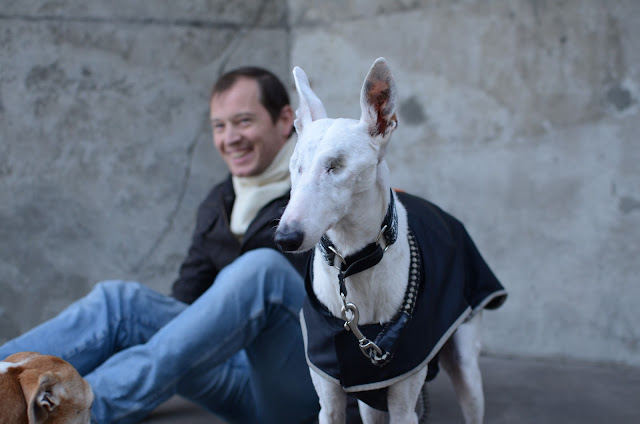 Lorca & her human ;-)
Because she had turned blind we thought that taking care of her would be very difficult, but nothing was further from the truth. In no time she knew the way from her baskets around the house to her water and feeding bowl, and back. When taking her for a walk, she knew by the amount of pull of the leesh on her collar that she was walking half a meter to my right or my left and that she walked the same direction as I did. Wether it was in a straight line, rounding a corner or in a circle. No stumbling, staggering or falling. And not running into trees and walls eirher. (well I helped with that last bit by stopping or turning in time.)
The greatest compliment to Lorca's coping with her blindness was that I have had people in the neighbourhood, that I had already passed several (sometimes dozens!) times while taking Lorca for a walk, come up to me one day and tell me that never before had they noticed that Lorca had no eyes. I was so proud of her! 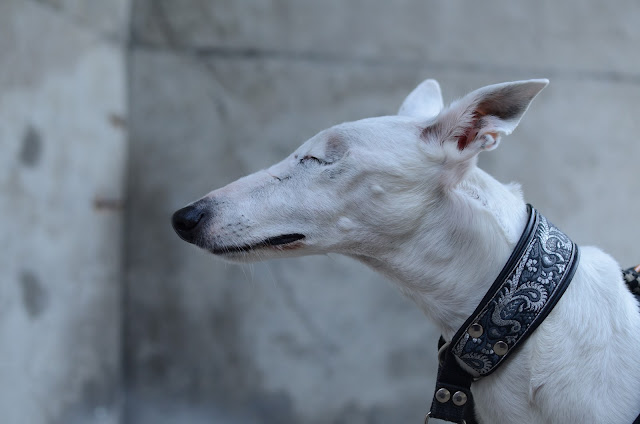 Lorca
She could not play with balls anymore though. Until, my partner came home with a ball with a little metal bell inside it. She almost immediately understood the possibilities of that bell.  And on the second day she played with it as if nothing had changed. She used her ears to follow the direction of the ball and her nose to find it when it had stopped rolling. When she found her target, and she almost always did, she would jump onto it with the same vigour she had always done. Capture the ball between her front paws and wag her tail furiously. And before you knew it, she would kick it away between her hind legs and go hunting after the tinkling sound. Off to another capture. The hunt was afoot! She stayed almost 3 years with us. Playful and cheerfull untill the end. Sweet, sweet memories.
Well, back to mini dogs! 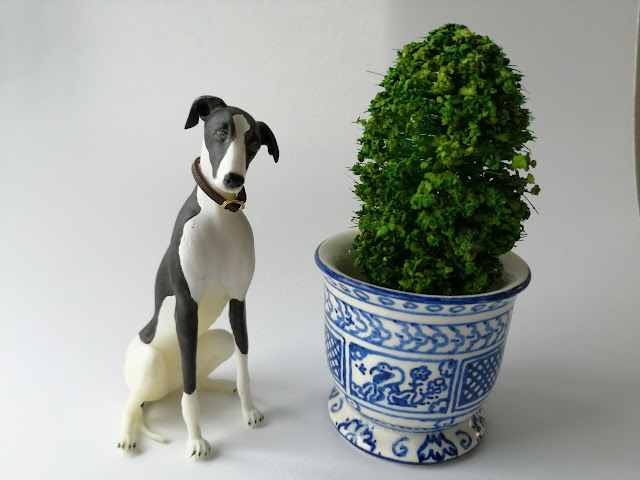 Theseus
I got Quintus in a job lot of second hand miniatures. I decided to keep him but I did not think about looking for more miniature animals. Then one day I saw the different dogs and hounds on Facebook that Patrick Duclou makes with his newly acquired 3d printer. He paints them himself. I asked him if he could make some greyhounds for me. 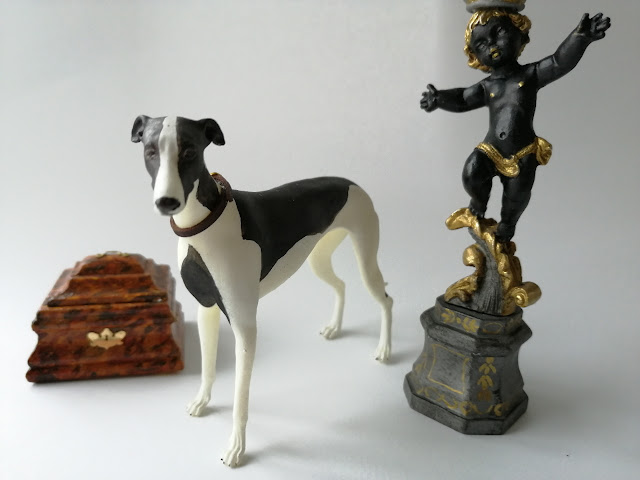 Erato
He happened to have three models of Greyhounds. I ordered two seated ones and one standing, painted in different ways. Patrick made them beautifully. 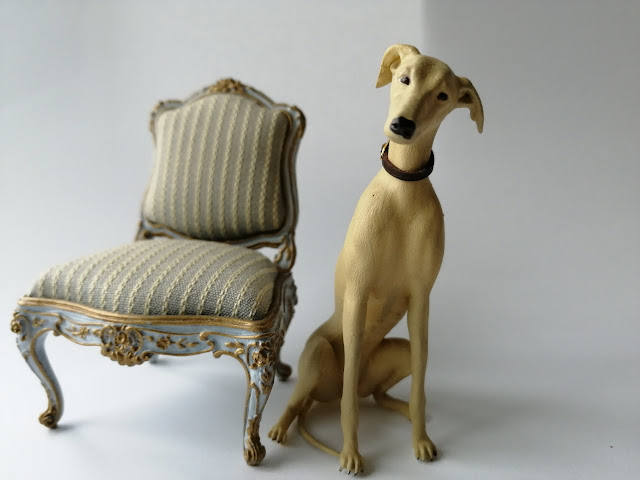 Arion
For me Lorca is unique. I pondered if I wanted to have a miniature version of her, but I decided against it. At least for now.
I have given these two lads and a lady Greek names. Arion, Erato and Theseus. I imagine them running around the house as the companions of sir and lady Zonneschut. Much to the chagrin of the house staff probably. And I can also imagine little Quintus being the boss of all of them.
Well, that's it for now. Be well and stay safe!
Huibrecht
op January 15, 2022

Email ThisBlogThis!Share to TwitterShare to FacebookShare to Pinterest
Labels: animals