Hello my friends. First I want to welcome Marijke, Monique and Miniature Treasures as the newest followers of my little project. Today I have something different for you. I hope you like to read about this marvelous miniature house. The Rotterdam Museum has an impressive Dollshouse. It looks like it is over 200 years old but is was built in the 1950's. It is built in a larger scale than 1:12 but nevertheless it is stunning!

Since the museum moved from the old Schielandhuis to a modern building it is no longer permanently on display which is a shame. The pictures are not mine but from the museumwebsite. Under their license I can use them as long as you know that they are not mine. The text is mine but based on the information I could find about this house.

Until recently I did not know this house existed, and I think I am not the only one so this post is meant to give it some well deserved publicity! :-)

Huis Bisschop at Leuvehaven 74 in Rotterdam was the model for the dollhouse. The original house on the Leuvehaven was demolished around 1911. The dollhouse in was made in the nineteen fifties.

Yarn trade
The real house was purchased in 1760 by the Bisschop brothers. They traded in yarn which was very profitable. They invested their money in their collections. The brothers not only collected art, books, silver, and porcelain, but also scienctific novelties and instruments.

They lived in a large house in a street called the Hang. They outgrew their house when they received more and more visitors who wanted to see their collections. Instead of buying a larger house, they bought the building at the Leuvehaven. The house was furnished for receiving visitors and housing their collections. The building, the interior and the collection were quite famous at that time. It was one of the first museums ofRotterdam in that sense although it was not open to the general public.

Royal visit
Five figures can be seen in the dollhouse, including Prince William V and Princess Wilhelmina of Prussia. This visit to view the collection has actualy happened. 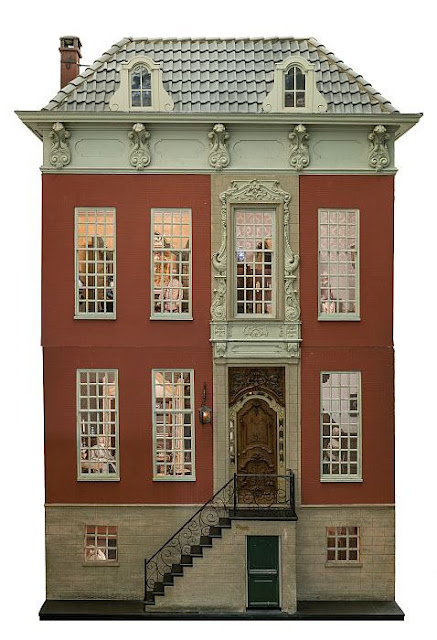 On the outside, stone stairs lead to the elevated front door with steps of slate, cast iron railing and basement door. Around the stairs lies pavement in front of the house. The basement floor of the house and the door surround is painted up to the first floor and sprinkled with sand to simulate sandstone. Red sanding paper has been pasted on the walls in which bricks have been carved. The white painted cornice with sculpted consoles simulates painted wood. Furthermore a lead gutter, sloping roof with earthenware roof tiles, chimney and two bell-shaped bay windows complete the exterior. The sculpted wooden door and skylight  are based on an existing example in the Museum Rotterdam collection. And last bu not least a hand made black iron Lantern is attached to the facade.

LOWER FLOOR:
Basement with two small windows. I could not find pictures of the basement unfortunately. I expect it to be empty because of that. 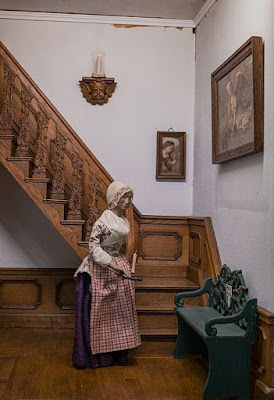 Hall: The hall seperates in two pats. The front hall situated between the front door and the main hall has a wooden interior  door with diamond shaped panes containing a, monogram JB (Jan Bisschop) sculpted in the skylight. A lantern hangs fom the middle of the white stucoed ceiling. Through the wooden interior door the front hall leads to an L-shaped main hall with oak parquet and sculpted staircase that leads nowhere. A doll of a maid stands in this hall. The hand sculpted bannisters are excuisite in my opinion. If only I could get those for Swinnendael...sigh. 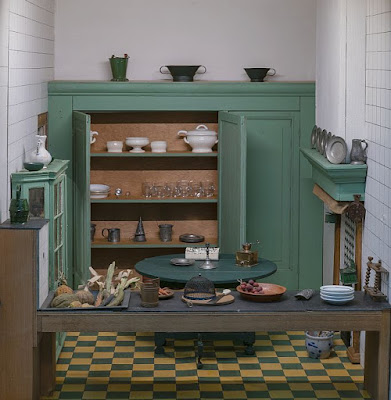 Kitchen: Located behind and accesible via the main hall. White walltiles (called: witjes) are simulated in paint. On the floor green-yellow floortiles (called: estrikken) are cut from vinyl (remember it was made in the fifties). The Kitchen has a large fixed green cupboard with three doors in the back wall. The chimney has a green mantelpiece and Delft blue tiles with black-and-white checkered tiles in the middle. The kitchen has a nice collection of miniatures although the yellowcopper coffeegrinder is a victorian anachronism as far as I know. :-) 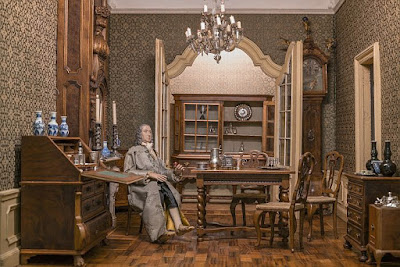 Salon: From the hall another door leads into the salon. With cream coloured paneling and an impressive carved wooden chimneybreast. Two doors with glass panes in the backwall seperate the salon from a small anterom which contains a porcelain cabinet on stand. above the paneling the walls are covered with brocade. The pieces of furniture are handmade and excuisitely crafted. Porcelain and silver miniatures are everywhere. My peronal favorite in this room is the longcase clock in the back of the room. 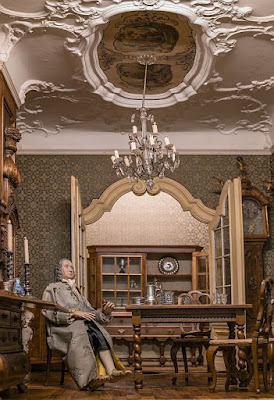 The host, one of the Bisschop brothers is seated in this salon wearing a housecoat and wearing a purplish wig. It is Jan Bisschop and he is wearing a mourning wig because by the time the royal visit took place his brother had died. But the real treasure of this room according to the museum is the miniature rococo plaster ceiling containing a painted medaillion in the center. The ceiling is a copy of a ceiling of the Original building which was saved from demolition and is now housed in the Schielandhuis in Rotterdam. 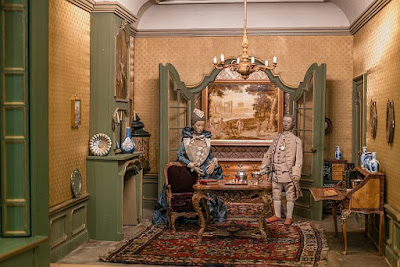 Study: Green painted wooden paneling, and a chimneybreast with a mirror and above that a painting. A ceiling with an alcove and barely visible a ceiling painting consisting of a sky with clouds and flying cherubs holding garlands with flowers. From the ceiling hangs a gilded wooden chandelier. The walls are covered with golden yellow fabric wallpaper.

The two dolls in this room represent the Princely couple who visited Rotterdam in 1768. Although the house is lovely furnished there is no suggestion of the famous collection with special pieces that warranted the royal visit. But that doesn't detract from the atractiveness of the house. If only we knew what the princely couple looked at. The chess set? the silverware or the bok?

The room is furnished with some splendid pieces of rococo furniture. In the back wall two doors with glass panes give acces to another little anteroom. There the walls are covered with what aims to resemble embossed leather panels. In the side wall is a door giving access to the bedroom. 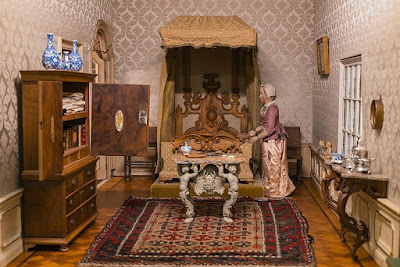 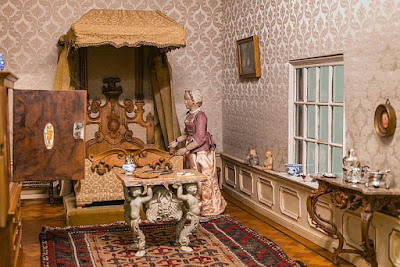 Bedroom: The walls are vovered with white paneling, and like the kitchen has a window on the side of the house, fabric wallpaper covers the walls above the panels, mahogany parquet covers the floor. Both study and bedroom have green hinged shutters. The half tester bed (lit d'ange) is pretty but has quite a weird looking headboard for an 18th century bed.

There are no pictures of the attic either. But the museum has a linnenpress a mangle and a folding table which they atribute to the Bisschop Dollshouse, so there may well be a 'kleerzolder' or clothes attic behind the rooftiles.

Well that's it for this post. I hope you have enjoyed this little tour of a very nice miniature house. Until next time!