Does David's bum look big in this? 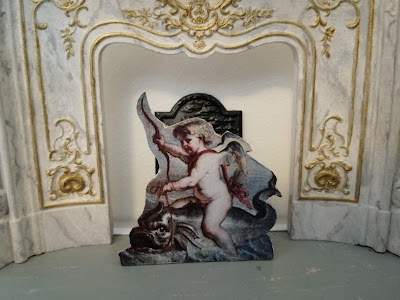 Hello my dear friends. Almost a month has passed since my haloween post. Time flies! And I had little time to spend on miniatures. But not all time has gone to waste. As the pictures above and below show I made a small dummy board to stand in the opening of a fireplace.

Not so long ago people thought that dummyboards were a decorative type of firescreen. Used to protect the people in the room from the heat of the fire.  But a screen made of wood, paper, cloth and paint is not built to resist heat of a roaring fire. And it won't, at least not for long.  So now the shared opninion is that surviving dummyboards (In France, Brittain and Holland at least) were used as summer hearths. Concealing the fireplace in a decorative way in the summermonths when they were not in use. By the mid 18th century they largely went out of use, but a country house like Huis ter Swinnendael is one of those places where these antiquated things seem to linger. Often dummy boards represent children, seated women like personifications of virtues. Here it is Cupid riding on the back of a dolphin. And his name is not David. ;-) 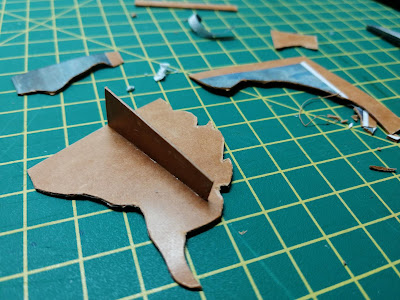 As you may know we have moved to live in Spijkenisse for the duration of the building of our 1:1 house. It will take at least a year before we move into it so there is plenty of time to settle in. So when I learned that Spijkenisse has its own bi-annual dollhouse fair I had no reason nor an excuse not to go there.
So last Sunday I visited the fair and had a great time. It was the first time I went to this fair. It was smaller than in Arnhem and more shops than miniaturists but a great source for materials. As you can see I bought several wooden beads, supple burgundy coloured goats leather, glue, a plate miniature of a sugar caster and some resin moulds. Another great find was 2 sheets of mirror plastic. 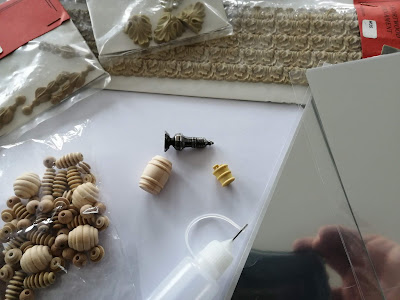 That same week I received some brass stampings that I had ordered via Etsy. Three metal plaques that I will turn into black metal fire backs, just like the one I made earlier with a little copper plaque depicting either 'Harvest' or 'Autumn' or the goddes 'Ceres'. The new plaques show from left to right, a very well dressed Sheppardess, Diana laying an arrow on her bow, and a crest with a motto Ican't quite decipher. :-) 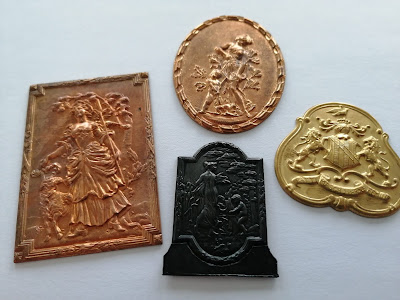 Together with these placques I bought two little frames and a few more stampings for which I will find a use soon enough. The little Rococo frame is turned into a standing mirror for a dressingtable. The other frame is decorated with a burning torch and a quiver full of arrows at the bottom. An oak branch and an olive branch on the sides and crowned by two birds. Symbols of death, valor, bravery and love. It is a frame meant to be filled by a hero. I will use it for a portrait of one of the male Zonneschuts who died in a war. 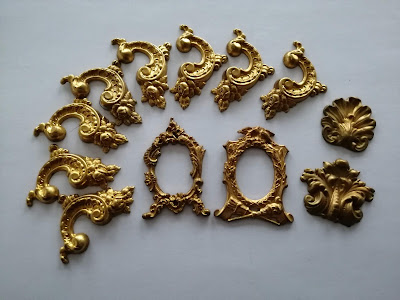 This week we were fortunate enough to have nothing on our social calendar. Not to be rude or unkind, but it was the first weekend we had to ourselves in eight weeks. So I enjoyed a sunday for miniature making. I chose simple tasks to get some things ready before starting on something new again. First order of the day was making two mirrors. The first is the standing rococo frame I have just bought, the second one is in a little frame I showed you in a blogpost a few months ago. 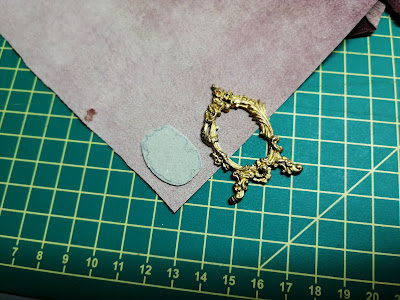 I cut out a cardboard backing for both of the frames and used those as templates for the mirror plastic. After cutting them out I layed the back of the standing mirror on the red goats leather I have bought. The dark red has a nice contrast with the golden colour of the frame. 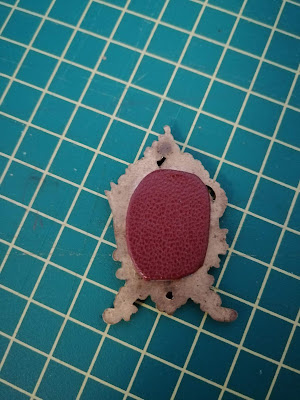 For the standing mirror I also cut out a backleg so the mirror can stand. For that I simply cut off the end of a coffeestick. I decorated it in the same way as the back of the mirror. The goats leather is so thin and supple that it is easy to work with. Smoothing it over edges withoud folds remaining was surprisingly easy. And lastly I carefully added the mirrorplastic.

After all, They should reflect something if I want to call them mirrors... So here in the last pic you can see the end result. Two mirrors mirroring a porcelain bird and David's ass. ;-) 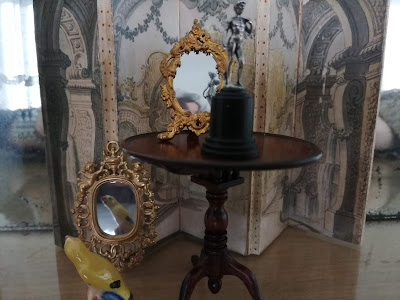 Thats it for now! I hope you have enjoyed reading this little post. I look forward to your comments and I hope to be back soon with progress on the marquetry chest that is nearly finished.